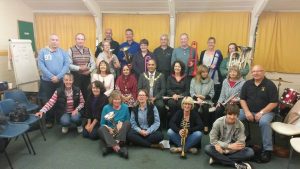 Immediately it started off in terrific fashion after they attracted over 20 participants to the launch event.

With local councillors on hand to show support, the budding players were invited to introduce themselves and explain why they had come along.

The aim of the class is to introduce brass band music making to a new audience, and to offer tailored tuition to different age profiles.

After a brief demonstration by Elland Youth and Senior Band players, everyone enjoyed their first go at becoming performers – with fantastic early results

The class was initially formed as a 6 week pilot project to test out if there was interest within the community.

Since the pilot ended the class continues to meet regularly where participants receive tailored tuition and ensemble playing. Some of our current members are complete novices, others are returning players and some are musicians who are new to playing a brass instrument.