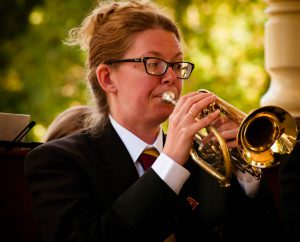 Elland Silver Band wishes to announce that Samantha Harrison, the bands long standing Principal Cornet player has decided to step down. Sam has been Principal Cornet with the band since 2001, after playing with with BT and Yorkshire Imps. Sam has decided to move to a less demanding role within the band so she can focus on her conducting and teaching work with our youth and training bands.

“It been an incredibly busy time at Elland. I put so much into working with the youth band and my teaching, that I feel the time is right to step down and hand over the position to a talented player who has the passion to lead the band forward as they develop in the Championship section. I am delighted to say that the band has found a fabulous successor, and I wish them every success. I have no intention of leaving the senior band and am really looking forward to a new role”, explained Sam.

The band would like to thank Sam for her years of dedication to the role and fabulous leadership. Sam will now take over the Flugel horn position from Pete Laidler. Pete has decided to retire from the band after being a member since around 2005, to concentrate on building a new family home. Pete has been a top bandsman, and will be greatly missed by the band.

We would also like to wish good luck to Bethan Plant, the bands Repiano cornet player. Bethan has been a member of the band she was 7 years old, and has come through our youth band into the senior band. We are extremely delighted to see Bethan taken up the Repiano Cornet seat with the Grimethorpe Colliery Brass Band.

The repiano seat has been filled by Adam Albinson. Adam has recently been playing Principal Cornet for the Middleton band and is currently studying at Salford University.

We would also like to welcome Steven Armitage on BBb Bass. Steven takes over from Kai Spencer who will take up the vacant Eb Bass position until he starts University in September. Steven has recently played for the Milnrow Band, but is an old friend of the band, having helped out on numerous occasions in the past.

“Its always sad when players leave and move on to pastures new, however, its great to welcome new players to the band, who are keen to develop our status in the championship section. I am really looking forward to the season ahead.”, Danny Brooks, Musical Director.

We would like to wish Bethan and Pete all the best with the best for the future.

Great to revisit Philip Sparke’s ‘Malvern Suite’ with the youth band this morning - brought back memories of early National Youth Band Championships with @ellandband Youth and Sellers Youth when I was a lot shorter and thinner! 🎺 https://twitter.com/FodensYouthBand/status/1363478352615661571

Thanks great to see our Flugel player and teacher @samharri5on featured.