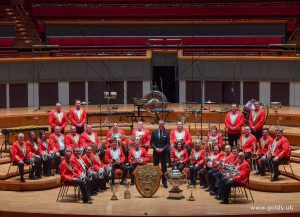 Elland Silver Youth Band is delighted to announce they will be performing a joint concert with Cory Band, the World’s Best Brass Band at Halifax Minster on Saturday 27th January 2018. The Cory Band, whose home is in Treorchy in the Welsh Valleys, comprises of both male and female performers o f mixed ages and backgrounds, hailing from near and far, but with one thing in common – the drive to do whatever it takes to keep Cory the world’s highest ranked brass band. Cory cemented their position as the world’s No.1 ranked band in 2016 by becoming the first band in history to win the European, British Open, National and Brass in Concert titles in the same calendar year. The band is proudly leading the traditional form of Brass Band amateur music-making into a new era by exuding a palpable sense of dynamism and professionalism.

“We are really looking forward to our visit and everyone is looking forward to be performing in the wonderful setting of Halifax Minster. Cory Band musicians love working with young musicians and we are very excited to meet and hear the talented Elland Youth members”, Phillip Harper, Musical Director of the Cory Band.

The Elland Silver Youth Band are one of the UK’s leading youth ensembles and are the current European Youth Brass Band Champions, conducted by the highly respected Samantha Harrison.  In November 2017 the band will perform in the prestigious Royal Albert Hall, London in the Music for Youth Schools Proms. “We are tremendously excited for our young musicians to have the opportunity to play alongside such a world-class group of musicians. The Cory Band has completely revolutionised the world of top-level banding in the last few years and this is an incredible opportunity to inspire our youngsters and one that I believe will benefit them for many years to come. This is going to be a very spectacular concert”, Elland Silver Youth Band MD Samantha Harrison, commented.

The concert is taking place in the wonderful setting of Halifax Minster, Causeway Foot, Halifax, HX1 1QR.  It starts at 7:30pm with advance tickets at just £12. Tickets on the night will be £14. Tickets are on sale from Monday 2nd October from Kathleen Harrison on 01484 717126, Halifax Minster on 01422 355436 or alternatively tickets can be booked online at www.coryband.com. We advise you book early to avoid disappointment.