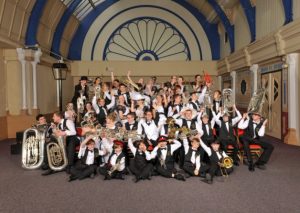 The youth band was formed in 1995 following an advertisement in the local press for young children wishing to learn brass instruments.  Several children applied to the advert and so it began.

The youth band has performed concerts at some of the finest concert halls in the country including, The Sage Centre (Gateshead), Bridgewater Hall (Manchester), Symphony Hall (Birmingham), The Royal Northern College of Music (Manchester) and Opera House (Blackpool). The band also performs regularly at Halifax Minster, Huddersfield Town Hall and other local churches and concert halls. They regular perform alongside some of the countries finest Championship section brass bands. They have also taken part in workshops at Salford University and compete annually in the Action Medical Research Entertainment Championships, Regional Festival of Music for Youth and the National Youth Brass Band Championships. In May 2016, the band also represented Brass Bands England at European Youth Brass Band Championships in Lille, France. 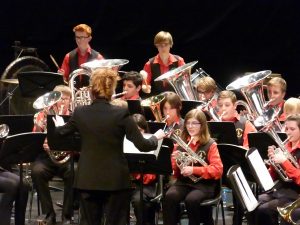 The youth band has approximately 40 members aged from 10 to 18 years, who are a minimum of grade 5 standard. Entry to the youth band is by application and informal audition by the bands Musical Director. Young people who are interested in being part of the band need to be able to attend weekly rehearsals on a Saturday morning from 10.00 -12.00 and also be able to attend extra rehearsals leading up to competitions.

The band are conducted by Miss Samantha Harrison. Samantha has led the band since its formation and has taught and inspired many of our young players. Samantha is a private instrumental teacher in local schools and is also the Principal Cornet player with our senior band. 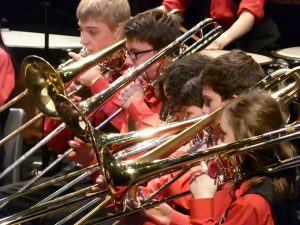 The band is now nationally regarded as one of the finest youth bands in the country. Several of our players have gone on to study music at Chethams School of Music, the Royal Northern College of Music, Birmingham Conservatoire the RWCD and Scottish Academy. Several of youth band players have progressed to our senior band and other local bands in the area. Ex members also play for the Black Dyke Band, Tredegar, Hammonds, Fairey’s, and Grimethorpe and Whitburn championship section bands.

Membership fees are £10 per month, paid monthly in advance by Direct Debit. Where possible instruments are provided free of charge from our instrument lending library. We also take a small £20 deposit against instruments which is refunded on return of the instrument in good working order.